Lala Lajpatrai Institute of Management celebrated Chakravyuh, their annual intercollegiate festival. The two day festival began on Saturday, October 6th and had an exhilarating theme – ‘Bollywood E-Style – Capture the Spirit’. For everyone who visited the campus on the weekend the event was nothing short of an enthralling experience. Having backed by months of preparation along with the heart and soul of every member, the event roared success, radiating positive vibes and energy all across. Chakravyuh hosted multiple events for all visitors such as quiz, debates, treasure hunts, marketing, product endorsements, etc. The lavish auditorium served as the main hub for all cultural activities like dance, singing, drama and fashion shows. For the foodies, there were a number of stalls serving scrumptious and healthy meals all along the campus. The highlight of the event was the incredible jam session by DJ Alex. With his reverberating energy, he made every soul present in the auditorium, groove to his beats. Fashion Show gave a glamorous edge to the evening along with sending out a social message to all. Bringing in the glitz and glamour of the theme in Bollywood E-Style, celebrities such as Femina Miss India – Miss Goa – Aashna Gurav, Harish Moyal, Navin Prabhakar, Imran Khan, and many others adorned the occasion. Apart from the D-day events, the core members of Chakravyuh, stayed true to their corporate social responsibilities and visited Balak Vihar Vidyalaya in Dadar. They engaged the students with games, dance performances and singing. The team spent the day with them sharing food, joy and laughter. To partake in the fun of Chakravyuh, the college had invited alumni students to re-live their college memories. The main event was followed by a felicitation programme to encourage and honour talent. Like all good things, Chakravyuh too came to an end with happy faces all around, and by congratulating the seniors who served as the nucleus of the event, organizing and putting forward a brilliant show for everyone.

Dr. Kamal Gupta, Chairman, Lala Lajpatrai Institute of management (LLIM): Happy to see Chakravyuh evolve into a grand event that was much bigger and better than ever!

chakravyuah 2017Lala Lajpatrai Institute of Management, Mumbai’s annual festival ‘Chakravyuh’ serves as an intersection point for several institutes across the city. The festival in its 12th year, promises greater fun, more events, more engagement and opportunities, thus justifying this year’s theme – ‘Iss Saal Dosti Ke Naam.’
The festival will be held on September 16-17, at the Lala Lajpatrai College. Sports activities will run parallel to other events. Well organized events, proper management and the exquisite Lala Lajpatrai college landmark makes no compromise in giving the audience the best by way of what they can expect at the festival.A total of 6000 students are expected to participate in the event to make it successful. ‘Chakravyuh’ encompasses more than 52 events covering multiple areas of management, sports , culture and arts.The cultural vertical promises a variable art fest with competitions for rangoli, face painting,nail painting, dance, personality contests and so on, opening up a platform to showcase creative courage. Events under the human resources banner include debates, scavenger hunts and quizzes that promise good cerebral exercise. The marketing segment pushes boundaries with a test of career skills.
The two-day event will host students from various B-schools in Mumbai and have celebrities from Bollywood in attendance. 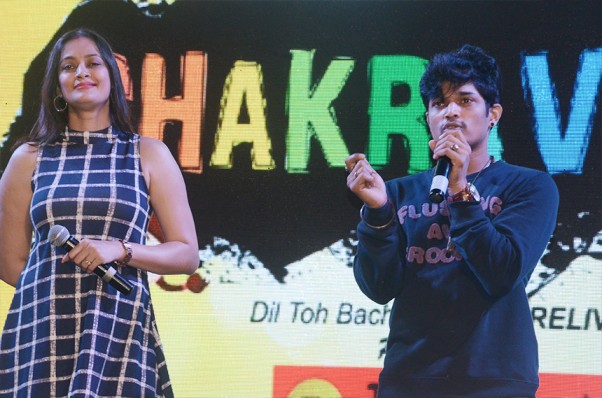 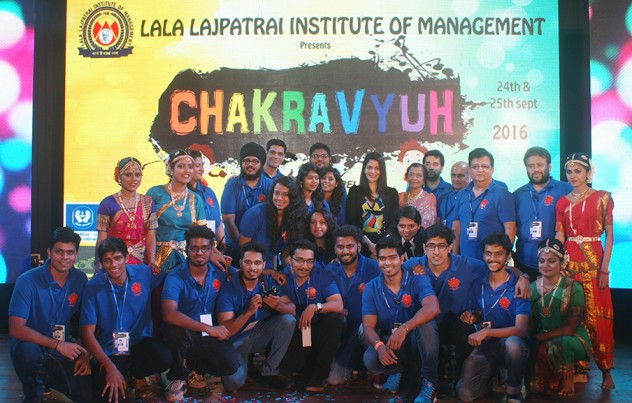 It was that day again where all the LLIM students showcased their talent. The annual festival Chakravyuh 2016, Dil Toh Bachha Hai Jii – Relive! was inaugurated by Ms. Ankita Shorey – Femina Miss India International 2011. Chakravyuh hosted over 52 events. The star cast of the upcoming movie ‘The Days of Tafree’ – Ms. Nimisha Mehta, Mr. Sanchay Goswami and Mr. Ansh Bagri judged the fashion show. The fest kicked off by events like ‘Mr and Ms Chakravyuh’ which was judged by Ms. Sophie Choudry who spread the heat by promoting her upcoming song. The other celebrities to grace the occasion were Ms. Jasveer Kaur, Mr. Mayuresh Wadkar and Mr. Saaeb Mohimtulay. 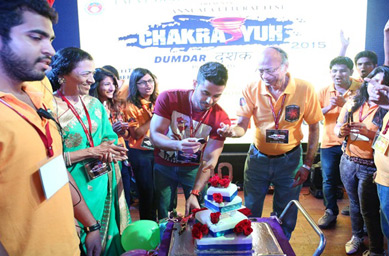 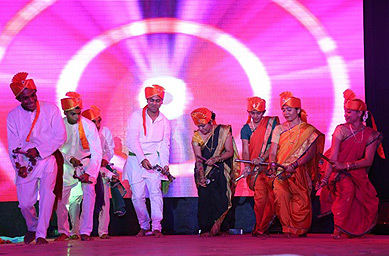 It was that day again where all the Lala-ites showcased their talent as management students. The annual fest, Chakravyuh 2015 DumdarDashak started with the inaugural ceremony wherein actor KunalKhemu spread the heat by promoting his upcoming movie ‘Gudduki gun’. Chakravyuh hosted over 52 events including a fashion show where television actor GunjanUtreja and Miss Navi Mumbai diva,Divya Agarwal judged the students showcasing their ramp moves on the stage. The fest kicked off by events like Mr and MsChakranyuh judged by the Uttran lead Mrunal Jain and other in-house events. 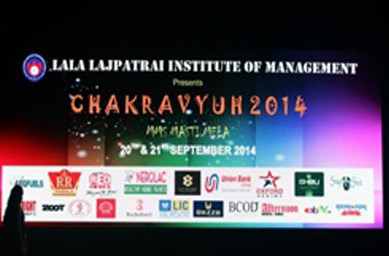 The festival of Lala Lajpatrai Institue of Management, gathered thousands of students, media personalities and ended as a success

Chakravyuh is the annual cultural festival of Laja Lajpatrai Institute of Management. Due to the constant motivation and encouragement by the Chairman – DrKamalji Gupta, Chakravyuh could enter its ninth glorious year.

This year, the theme of the festival was MMS MastiMela which was held on September 20 and 21. The Chakravyuh Team ensured that it had a perfect blend of fun and learning with various HR, Marketing, Finance, Sports and Cultural events. Chakravyuh 2014 was inaugurated with a huge bang by Bollywood hottiePurabKohli. It acted as an interactive platform for students from more than 50 management institutes having more than 6,000 footfalls.

The Management of LLIM did not limit themselves from sharing happiness amongst the various management institutes and the cancer affected children in association with the Tata Memorial Hospital. The other cause which Chakravyuh 2014 supported was Project Chirag to light up the lives of many people in villages who still do not have electricity supply. Chakravyuh 2014 welcomed more than 50 sponsors with its title sponsor being S Purohit Group of Companies.

Chakravyuh had an array of events where students had the opportunity to showcase their Management talent and Creative skills. Management events like BhoolBhullaiya, Beg Borrow Steal, Mock Stock, Talaash, Brand Housie, Word War, VyapaarMela were a big hit amongst management students.

Chakravyuh 2014 hit a new high by having internationally acclaimed artist DJ Alex & VJ Tarang to entice the students with his DJ session. Chakravyuh being a Management fest, how could Dabbawalas be missed? To pay tribute to them, LLIM students showcased a fashion show dedicated to Mumbai’s Dabbawalas. A Rock concert which was organised by LLIM students in association with Furtados proved the versatility of the LLIM students and also raised the energy at the festival. To promote Hockey in today’s youth, a hockey competition was also held sponsored by Mumbai Hockey Association. 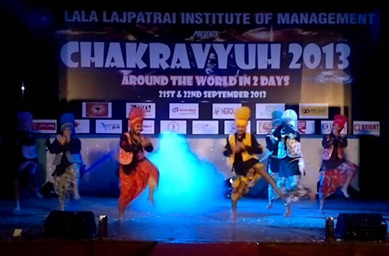 Lala Lajpatrai Institute of Management (LLIM) organized its annual inter collegiate festival ‘Chakravyuh’ earlier this month. The event was inaugurated by TV personality and radio jockey Manish Paul. The cast of upcoming movies such as Warning 3D and MakdiJaal were also present. Participants from over 85 institutes worked at different events and games. Chairman of LLIM Kamal Gupta said , “ In any game, one wins and one loses but that’s a deciding factor and so let the best man win”. The festival also welcomed children from Bal Ashram to the event.

Mr. AbhijeetSawant singing along with a child from The Tata Memorial Centre at Lala Lajpatrai Institute of Management 7th Annual Cultural Festival

Lala Lapatrai Institute of Management inaugurated its 7th Annual Cultural Festival ‘Chakravyuh’ on the 24th of September 2011. This prestigious event was inaugurated in the morning by Mr. AbhijeetSawant- the first-ever Indian Idol. Since its foundation 6 years back, Chakravyuh has consistently been successful in cultivating as well as refining the attitude, skill and knowledge of thousands of management students studying in various management institutes in Mumbai. This year, ‘Chakravyuh’ received an overwhelming response of more than 6,000 students coming in from over 50 management institutes across the city.

LLIM also conducted its ‘Share Happiness’ campaign by inviting more than 20 cancer affected children from The Tata Memorial Centre for this event. The purpose of this campaign was to briefly contribute to the happiness of these special children. Various arrangements like games, gifts, interaction with the chief guest, etc. were made to bring in a ray of joy and delight of these extraordinary guests. When asked about his experience in ‘Chakravyuh’, one of the children said, “Me and my friends were delighted to be here and had a lot of fun especially playing games. We also enjoyed our interaction with AbhijeetSawant. ” AbhijeetSawant added that, “Apart from organising a fantastic event like ‘Chakravyuh’, I really appreciate LLlM’s efforts to organise this ‘Share Happiness’ campaign for these beautiful children from The Tata Memorial Centre. I am glad to be a part of this great gesture.”

The theme for this year was Life: Play School to B-School. The events struck a perfect blend between easy to understand games and challenging management tasks strictly sticking to the objective of nurturing the participants in various fields of management studies. When asked about Chakravyuh, Prof. Harvind. J. Bhasin, Chairperson for Chakravyuh and M.M.S co-ordinator said that, “Chakravyuh has always been a great platform to provide a glimpse of the corporate world to various management students across the city through our various events. It was an honour to have cancer affected children from The Tata Memorial Centre as our guest which added to the prestige of Chakravyuh.” Dr. Kamal Gupta, Chairman, Lala Lajpatrai Institute of Management commented, “I am proud of our management students for organising an event like ‘Chakravyuh’ on such a large scale.”